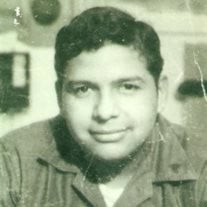 A Catholic funeral service mass for Ysabel Y. "Chavelo" Gonzlales, age 62, of Lamesa, Texas, will be at 10:00 a.m. on Monday, January 20, 2014 at St. Margaret Mary Catholic Church with Father Joselph Kurumbel officiating. Burial in follow to Lamesa Memorial Park in the Military Veteran's Honor section including funeral burial honors with the US ARMY. Funeral arrangements are under the care and direction of Gonzlales Funeral Home of Lamesa, Texas. Rosary services will be held at 7:00 p.m. on Saturday and Sunday at Gonzales Funeral Home Chapel. Mr. Gonzales passed away on Thusrday, January 16, 2014 at Covenant Medical Center in Lubbock, Texas. He was born on June 12, 1951 in Galveston, Texas. Chavelo married Janie Toscano on June 15, 1973 in Beeville, Texas. Chavelo had worked for the Lamesa ISD for over twenty years. He also served and was a veteran of the US ARMY. Chavelo was a music DJ for "Bad Boyz". Preceded him in death were his parents, Narciso and Emilia Gonzales; his daughter, April Gonzales. Chavelo is survided by his wife, Janie Gonzales of Lamesa; his daughter, Melissa Gonzales-Barrioz of Lamesa; his two grandsons, Jonas Resendez and Jacob Resendez and his grand-daughter, April Barrioz, all of Lamesa, Texas; two brothers and two sisters-in-law, Joe L. Gonzales and wife, Melinda and Jesse Gonzales and wife, Irma, all of Lamesa, Texas; two sisters, Mary Mejia and husband, Lupe of McKinney, Texas and Lupita Valderas of Levelland, Texas.

The family of Ysabel Y. Gonzales created this Life Tributes page to make it easy to share your memories.