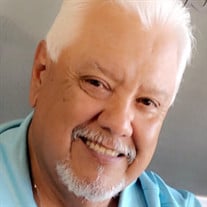 A Catholic funeral mass service will be celebrated for Tony Hernandez age 59 of Lamesa, TX. at 10:00 a.m. Monday October 12, 2020 at St. Margaret Mary Catholic Church with Father Chacko Thadathil officiating. There will be limited seating and face mask is required at both the funeral home and church. Burial committal will follow to the Dawson County Cemetery. Due to the church limited seating, the Funeral Mass service will be "Live Streaming" via facebook at, St. Margaret Mary/Our Lady of Guadalupe Catholic Church. Funeral arrangements are under the care and direction of Gonzales Funeral Home. Due to area Covid-19 situations we continue with public safety. Visitation and viewing will be held on Saturday October 10, 2020 from 11:00 a.m. until 9:00 p.m. and on Sunday October 11, 2020 from 9:00 a.m. until 9:00 p.m. with Rosary prayers services at 7:00 p.m. at Gonzales Funeral Home Chapel. Tony was called home by his Lord on Friday October 9, 2020 at Covenant Medical Center in Lubbock, TX. He was born on September 22, 1961 in Lamesa, TX. Tony married Martha Perez on May 22, 1982 in Lamesa, TX. He was preceded in death by his beloved son Tony Hernandez, Jr. (TJ); his mother Lupe Valdez; his brother, Juan Molina III; his father, Augustine Hernandez. Tony was a beloved husband, amazing father, and a wonderful POPO! His life consisted of being around his loving family. He was his grandkids biggest fan on the sports stands. He and Martha spent numerous hours on the road traveling to grandkids events and spending time together. Tony loved music and singing, fishing, and gambling at the casinos. He admired his beautiful wife, they married so young they both made a solid foundation for their family. Tony was a faithful member of St. Margaret Mary Catholic Church where he served as communion minister, CCE teacher, and served as a member on the Parish Council. He was a member of the Lamesa Knights of Columbus Council 7953 where he served ounce as Grand Knight. Tony was a community leader, he was a formal elected official serving served as a member of the Lamesa City Council, had also served on the Lamesa Economic Development Corporation, and presently serving as an elected official to the Dawson County Commissioners Court, Precinct Two. Tony is survived by his loving family, Martha Hernandez of Lamesa; his daughters, Crystal Hernandez, Sandy Flores and his son-in-law, Ismael Flores, and Stace Hernandez and his son-in-law, Anthony Hernandez, all of Lamesa; his precious 7 grandchildren, Chompies, KK, Isaak, Myranda, Bella, TJ, and RJ; numerous relatives and friends. Pallbearers will be, Dr. Mark Key, Dionicio Garza, Jr., Jose Aguayo, Chris Perez, Angel Perez, Jr., Victor Acosta, Tony Ramos, Anthony Lopez. Honorary pallbearer, Nathan Flores.

The family of TONY HERNANDEZ created this Life Tributes page to make it easy to share your memories.

A Catholic funeral mass service will be celebrated for Tony Hernandez...

Send flowers to the HERNANDEZ family.