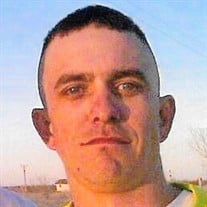 Funeral services for Tommy K. Vela age 39 of Lamesa, TX. were held at 1:30 p.m. Thursday, February 13, 2020 at the Church of the Nazarene with Pastor Lee Lennon officiating. Interment will follow to the Dawson County Cemetery. Funeral arrangements are under the care and direction of Gonzales Funeral Home. Viewing was held on Thursday, February 13, 2020 from 1:00 p.m. until 1:30 pm. at the Church of the Nazarene. Tommy passed away on Thursday January 30, 2020 in Lamesa. He was born on February 10, 1981 in Corsicana, TX. He was preceded in death by his step-father, James Allred; grandfather, Willie Joe Waller; grandparents, Henry and Rita Vela; his cousin, Rickey Vela. Tommy worked in the oilfield. He enjoyed outdoors, and volunteered around the community helping others in need. Tommy is survived by his sons, Christian Alcorta, Isaac Vela, Jordan Vela, Josiah Vela, all of Lamesa, and Sythen Vela of Dallas, TX.; his daughters, Ivy Vela of Lamesa, and Alizae Sanchez, Breanna Vela, and Melanie Vela, all of Dallas, TX.; his dad, Ray Vela, Sr. of Odessa, TX. and his mother, Janet Rodriquez of Lamesa; his brothers, Ray Velea, Jr., and Derrick Rodriguez, both of Lamesa; his sisters, Crystal Rodriguez, Latoya Rodriguez, both of Lamesa; his grandmother, Patsy Armstrong of Lamesa; numerous nieces, nephews, aunts, uncles, cousins, and friends.

The family of TOMMY K. VELA created this Life Tributes page to make it easy to share your memories.

Send flowers to the VELA family.