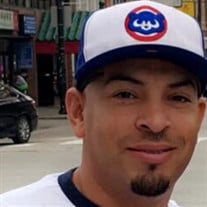 A Catholic funeral mass service for Rudolph Fernandez age 38 of Lamesa, Texas will be held at 2:00 p.m. Thursday October 26, 2017 at St. Margaret Mary Catholic Church with Father Joseph Kurumbel officiating. Interment will follow to Dawson County Cemetery. Funeral arrangements were under the care and direction of Gonzales Funeral Home of Lamesa, Texas. Viewing and visitation will be held on Wednesday, October 25, 2017 at Gonzales Funeral Home Chapel with a Rosary prayer service starting at 7:00 p.m. Rudolph passed away on Saturday October 21, 2017 in Lamesa, Texas. He was born on December 14, 1978 in Lamesa, Texas. Rudolph married Amanda Alvarado on June 21, 2014 in Lamesa, Texas Rudolph loved baseball and teaching his son Ivan. He enjoyed traveling with his family and working-out. He liked attending sports events, hanging out with all of his friends and having a good time. Times were never boring with Rudolph, he would always say he was the "champ". Rudolph was employed by Impact Chemical. Rudolph is survived by his family, his wife, Amanda Fernandez of Lamesa; his sons, Christian of San Angelo, Texas and Ivan of Lamesa, Texas; his daughters, Angelica of Lubbock, Texas and Aliyah of Lamesa, Texas; his parents, Emigdio and Mary Fernandez of Lamesa, Texas; his brothers, Albert Billalobos and Celia of Arlington, Texas, Edward Fernandez and Prissy of Greeley, Colorado and George Fernandez and Jennifer of Midland, Texas.

The family of RUDOLPH FERNANDEZ created this Life Tributes page to make it easy to share your memories.