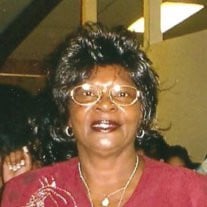 Funeral services for 70 year old, Ruby Lee Butler, of Lamesa, TX., have been set for 2:00 P.M., Saturday, March 23, 2013 at The Lighthouse Community Center with Pastor Rufuss Hunter officiating. Burial will follow at Lamesa Memorial Park under the direction of Gonzales Funeral Home. Visitation will be 6:00P.M. to 8:00P.M., at the funeral home. Ruby passed away at her residence Sunday, March 17, 2013 at her residence. Ruby was born July 5, 1942 to Elder Austin Butler and Maranda Fuller in Marshall, Texas. She moved to Lamesa at a very early age. She attended Blackshear School in Lamesa. Her parents and two brothers, O.Z. Butler and Willie Butler, preceded her in death. Ruby worked at Lamesa Steam Laundry for many years. She worked at Lamsa Cotton Oil Mill, Green Hut Cafe and Claiborne's Thriftway Supermarket.She moved to Big Spring, TX for a short time and worked at Rip Griffin/TA Truck Stop. Ruby was a faithful member of Prayer House COGIC. She was a great cook and her family love her delicadies. Her family and everyone that knew Ruby will miss her greatly. We loved her but the Lord loved her most. She is in a better place and one day we will all ge together again! She leaves to cherish her precious memories, one son, Greg Butler of Lamesa; three daughters, Sylvia G. Williams, and husband Bennie of Arlington, TX., Sylvia J. Butler of Irving, TX and Olivia D. Butler of Ft. Worh, TX.; three sisters, Dorothy Hunter of Lamesa, Carolyn Butler and Calanthia Butler, both of Arlington, TX.; three aunts, Johnnie Williams of Kermit, TX., Lola Vinson and Delores Thirkill, both of Amarillo, TX.; six grandchildren; seventeen great-grandchildren; a host of nieces and nephews, relatives and friends.

The family of Ruby Lee Butler created this Life Tributes page to make it easy to share your memories.

Send flowers to the Butler family.