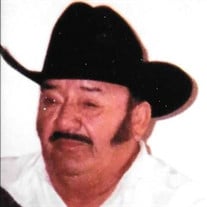 A Catholic funeral service mass for Ruben (Montoya) Perez, age 80 of Lamesa, Texas will be at 10:00 a.m. on Wednesday, August 19, 2015 at St. Margaret Mary Catholic Church with Father Joseph Thanavelil officiating. Burial will follow to Dawson County Cemetery. Funeral arrangements are under the care and direction of Gonzales Funeral Home of Lamesa, Texas. A Rosary will be recited at 7:00 p.m. on Tuesday, August 18, 2015 at Gonzales Funeral Home. Ruben was born on June 15, 1935 in Kennedy, Texas. He married Mary Rivera on June 26, 1962 in Lamesa. Ruben was preceded in death by his parents, Viviano and Eloisa Perez; his son, Joe Perez; his brothers, Willie Perez, Ricardo Perez, Enrique Perez; his sisters, Maria Guzman, Genoveva Perez, Herminia Rodriguez, Amelia Rivera. Ruben was a cotton-ginner until his retirement. He loved spending time with his family and joking around. He enjoyed playing cards with his friends and going fishing. He was known by family and friends by his nickname of "Montoya". Ruben is survived by his family, his wife, Mary R. Perez of Lamesa, Texas; his sons, Gilbert Perez of Lamesa, Texas, Steve Cavazos of Grandfalls, Texas, Ruben Cavazos of Odessa, Texas; his daughters, Diana Perez, Norma Perez, step-daughter, Julia Lopez, all of Lamesa, Texas;20 grandchildren; 52 great-grand children.

The family of Ruben "Montoya" Perez created this Life Tributes page to make it easy to share your memories.

Send flowers to the Perez family.