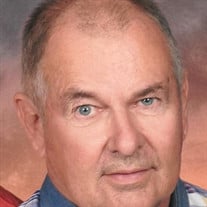 RONNIE RAY On Saturday, August 29, 2020, Ronald “Ronnie” Lee Ray passed away in his residence of Lamesa, Texas, at the age of 81. A memorial service will be held at Forrest Park on Thursday, September 3, 2020, at 10:00 am. Please bring a chair, as we will congregate at the Gazebo located across from the Forrest Park Community Center building. Memorial service arrangements are under the care and direction of Gonzales Funeral Home. Ronnie was well known throughout the community of farmers, homeowners, and readers of the local newspaper and his newspaper columns. Ronnie also avidly enjoyed growing watermelons and donating them around town every year. He was given his nickname, “The Watermelon Man!” Ronnie was born on April 12, 1939, to Klyde and Essie Ramsey Ray. Ronnie wore many hats as a farmer, insurance salesman & adjuster, author, Fire-Fighter & Arson Investigator, Deputy Sheriff, and Constable of Dawson County, Texas. Once retired, Ronnie had one last endeavor of an RV Park on the farm, “In the Pines RV Park.” Ronnie was preceded in death by his father Klyde, mother Essie, brother Wilbur, sisters-in-law Nova & Frances, and step-son Kendall Amos. He is survived by his brother, Milton of Memphis, Tennessee; daughter Dawn “Suede” Ray of Lamesa, Texas; son Dan Ray and wife Jennifer of Lamesa, Texas; and stepdaughter Metta Perry and husband Ron of Lubbock, Texas. Ten grandchildren and eleven great-grandchildren survive him.

The family of RONALD LEE "RONNIE" RAY created this Life Tributes page to make it easy to share your memories.

Send flowers to the RAY family.