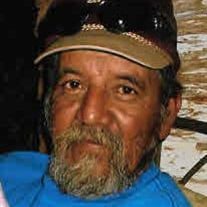 A funeral service was held 10:00 a.m. on Wednesday, December 10, 2014 for Roberto Ortiz Gonzales, age 62 of Lamesa, Texas at La Primera Baptist Church with Pastor Larry Gamez officiating. Burial followed to Dawson County Cemetery. Funeral arrangements were under the care and direction of Gonzales Funeral Home of Lamesa, Texas. Roberto died on Saturday, December 6, 2014 at his home in Lamesa. He was born on June 9, 21952 in Sinton, Texas. Roberto and Louisa Medrano made their live together in Lamesa for 35 years. He was a self-employed carpenter. Roberto was preceded in death by his son, Roberto Gonzales, Jr..; his parents, Luis and Anita Gonzales; his brother, Luis Gonzales, Jr.,; his sisters, Petra Caballero and Alejandra Gonzales. Survivors include; his spouse, Louisa Medrano of Lamesa; his loving daugthter, San Juanita Ramirez; and all the grandchildren and great-grandchildren who loved him; his sisters, Rosa Carranza of Rasien, CA., Eladia Hinojosa of Portland, TX., Dominga Cardona of Mundelin, IL., Maria Medina of Lamesa, TX., Sylvia Webber of Odessa, TX.; his brothers, Felix Ortiz of Nebraska, Benito Gonzales of Odessa, TX., Raul Gonzales and Sammy Gonzales, both of Lamesa, TX.

The family of Roberto Ortiz Gonzales created this Life Tributes page to make it easy to share your memories.