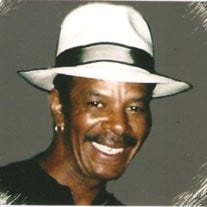 Funeral services for Robert Lee Scott, age 68 of Dallas, Texas will be at 1:00 p.m. on Saturday, May 25, 2013 at St. John's Missionary Baptist Church with Rev. Arvin Medlock, pastor officiating with Pastor Cora Brown as eulogist. Interment will follow at Dawson County Cemetery. Arrangements entrusted under the direction of Gonzales Funeral Home. Robert passed peacefully on Friday, May 17, 2013 at the Mesquite Specialty Hospital in Mesquite, Texas. Robert was born on October 28, 1944 in Slaton, Texas to Maurice Scott and Lorine Flemings Scott. He attended St. John Missionary Baptist Church and Blackshear School while growing up in Lamesa, Texas. Robert was born with great talent, which he used very wisely. He was brilliant in his craft, particularly noteworthly since he was self-taught. He was an excellent artist. At a young age, he drew pictures and sold them to people in the neighborhood. He later moved to Dallas, Texas and began working in a ladies clothing designing factory, where he soon realized he could do better on his own. Robert formed his own business as a ladies' fashion designer and had a sincere passion for what he did. Women in Lamesa looked forward to buying his fashions when he came to town. His business was very lucrative until be became ill. He was preceded in death by his father, Maurice Scott and his mother, Lorine Scott Massey; brothers, Jimmy Posey and Louie Scott; sister, Sherry Roberts. Robert Lee is survived by his devoted wife, LaBarbara Scott of Dallas, Texas; daughters, Carmell Scott of Los Angeles, CA. and Cassandra Lyons of Midland, Texas; son, LaQuarrie Scott of Midland, Texas; grandsons, Emperor Scott of Los Angeles, CA., Jean-Montrey Lyons of Midland, Texas, JaQuanye Lyons of Midland, Texas; grand-daughters, Jakay Lyons and Quarria Scott of Midland, Texas; sisters, Glo Butler and husband Charles of Dayton, OH., Rosemary Morgan and husband Tim of Kansas City, MO., Carolyn Parker and husband Zel of Slaton, Texas; brothers, Maurice Scott, Jr. and wife Rose of Slaton, Texas, Joe Scott and wife Melva of Lamesa, Texas and that were constantly at Robert's side and caring for him until his demise and Walter Posey of Los Angeles, CA.; paternal aunts, Perline Scott of Lubbock, Texas, Verline Scott of Slaton, Texas, Piney Scott of Abilene, Texas and Gwendolyn Scott of Dickinson, Texas; a host of nieces, nephews, cousins and many good friends. Robert will be greatly missed!

The family of Robert Lee Scott created this Life Tributes page to make it easy to share your memories.

Send flowers to the Scott family.