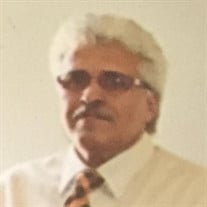 Funeral services for Robert (Bobby) Hernandez, age 60 of Lamesa, Texas, will be held at 2:00 p.m. on Wednesday, November 11, 2015 at the church of TEMPLO ELIM located at 612 S. Ave. F in Lamesa, with officiants, Pastor, Joe Hernandez of Floydada, Texas and Pastor David Gomez of Galveston, Texas. Interment will follow to Dawson County Cemetery. Funeral arrangements are under the care and direction of Gonzales Funeral Home of Lamesa, Texas. Viewing and visitation will be held on Tuesday, November 10, 2015 at Gonzales Funeral Home Chapel with an Inspirational Service set for 7:00 p.m. While in a Lubbock, Texas hospital, Robert was called home by his Lord and Savior Jesus Christ, on Monday, November 9, 2015. He was born on December 11, 1954 in Punkin Center/Welch, TX. Robert was a professional hair stylist for 40 years, and owned and operated his business of Robert's Beauty Salon for many years in Lamesa. He was a collector of interesting items. Robert loved christian music, in fact, when you stepped into his shop, he always had christian music playing. Robert served his Lord with a great passion. He was a lifetime member of the church Templo Elim and was dedicated to his church, where he also participated for many years as the church music director and led the Praise & Worship Team. Robert also served for many years as church Treasurer and Secretary and the Director of the church Youth group of "Los Jovenes". Robert was a loving brother, uncle and friend, and above all, a good christian who witnessed his faith. Robert was preceded in death by his parents, Ramon Hernandez, Sr. and Virginia Hernandez; his sister, Janie Quintanilla. Robert leaves behind to cherish his memory, his beloved family, his sister, Noemi Alvarez and husband, Lupe Alvarez of Lamesa, Texas; his brothers, Ramon Hernandez, Jr. and wife, Beatrice Hernandez of Lamesa, Texas and Ismael Hernandez and wife, Lucy Hernandez of Lamesa, Texas; numerous family relatives and friends. Bobby will be truly missed!

Funeral services for Robert (Bobby) Hernandez, age 60 of Lamesa, Texas, will be held at 2:00 p.m. on Wednesday, November 11, 2015 at the church of TEMPLO ELIM located at 612 S. Ave. F in Lamesa, with officiants, Pastor, Joe Hernandez of Floydada,... View Obituary & Service Information

The family of Robert (Bobby) Hernandez created this Life Tributes page to make it easy to share your memories.