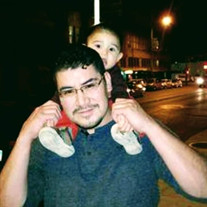 Robert Lee Conde passed away unexpectedly in San Antonio, Texas on Thursday June 11, 2020. He was born March 22, 1980 in Lamesa, Texas. He graduated from Lamesa High School and attended Howard College. He was a specialized wood worker and craftsman. Obscure artists and mosaic tile layer. He painted murals on building walls in Spur, Texas and Santa Fe, New Mexico. He designed ornaments for the 50 foot Christmas tree in downtown San Antonio, Texas. He held many titles in the San Antonio, Texas food industry but his favorite opportunity was being a chef prep cook. His greatest accomplishment was becoming a father. He loved his son Isaac with all his heart and soul. Many of the favorite things he enjoyed was listening to music spending time with his nieces and nephews, he loved making other people laugh and loved watching the Dallas Cowboys and San Antonio Spurs games with his entire family. His ultimate passion was traveling the world. He found beauty in everyone he met and every place he went. Robert Lee is survived by his family, son Isaac Elijah Conde, grandmother, Celedonia Artiaga, father Robert Conde, and mother, Betty Conde of Lamesa; brother Marcus Conde and wife Natalie Conde, nieces, Savannah, Penelope, and Molly Conde, and nephew Oliver Conde, all of Lamesa, brother, Matt Conde and Alexius Hernandez and nieces Nikkiah and Charlotte Conde of Lamesa. He also left behind many family members that considered him a son and brother. Numerous relatives and friends. There are no words strong enough to explain his magnificence. Our sons are the loves of our life and Robert Lee will be forever missed thought he lives though all of us. Funeral arrangements were under the care and direction of Gonzales Funeral Home.

Robert Lee Conde passed away unexpectedly in San Antonio, Texas on Thursday June 11, 2020. He was born March 22, 1980 in Lamesa, Texas. He graduated from Lamesa High School and attended Howard College. He was a specialized wood worker and craftsman.... View Obituary & Service Information

The family of ROBERT LEE CONDE created this Life Tributes page to make it easy to share your memories.

Send flowers to the CONDE family.