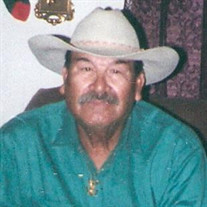 A Catholic funeral mass will be celebrated for Refugio Moreno, Sr. age 84 of Lamesa, TX. at 2:00 p.m. Wednesday, March 13, 2019 at St. Margaret Mary Catholic Church with Father Joseph Kurumbel officiating. Burial will follow to the Dawson County Cemetery. Funeral arrangments were under the care and direction of Gonzales Funeral Home of Lamesa, TX. A Rosary prayer service will be held at 7: 00p.m. on Tuesday, March 12, 2019 at Gonzales Funeral Home Chapel. Refugio passed away on Monday March 11, 2019 in Lamesa, Texas. He was born on July 4, 1934 in San Antonio, Texas. Refugio married Guadalupe Reyes in Lamesa, TX. Refugio was preceded in death by his wife, Guadalupe R. Moreno; his parents, Desiderio Moreno and Lucia Moreno; his son-in-law, Johnny Ogeda; his brothers-in-law, Jose Gomez, Modesto Cuellar, and Martin Guerrero; his siblings Antonio Moreno and Cruz Rodriguez. Refugio worked as a cotton ginner and later was a farmer until his retirement. He had a great passion for music, especially when he played his 12 string guitar and sang with his friends and also the years he played in the church choir. Survivors include his his sons, Refugio Moreno, Jr. and Gloria of Lamesa, TX., and David Moreno and Delfina of Laredo, TX.; his daughter, Nancy Ogeda of Lamesa, TX.; his brother, Martin Moreno of Lamesa, TX.; his sisters, Lydia Gomez and Johnny of Ackerly, TX., Marcela Cuellar of Lamesa, TX., Delia Zamora and Frank of Rankin, TX., Irene Galindo and Rey of Lamesa, TX., and Sylvia Guerrero of Lamesa, TX.; 7 grandchildren, 19 great-grandchidren, 8 great-great-grandchildren; numerous relatives and friends.

The family of REFUGIO MORENO SR. created this Life Tributes page to make it easy to share your memories.

A Catholic funeral mass will be celebrated for Refugio Moreno,...

Send flowers to the MORENO family.