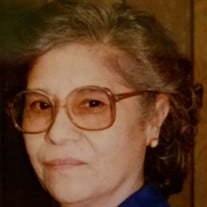 A Catholic funeral mass will be celebrated for Ramona B. Ramos, age 81 of Lamesa, Texas at 2:00 p.m. Friday, February 10, 2017 at St. Margaret Mary Catholic Church with Father John Steven Rathinam officiating and assisted by Deacon Daniel Valenzuela. Interment will follow in Dawson County Cemetery. Funeral arrangments are under the care and direction of Gonzales Funeral Home of Lamesa, Texas. Viewing will be held on Thursday with a 7:00 p.m. Rosary service at Gonzales Funeral Home Chapel. Ramona passed away on Wendesday February 8, 2017 at her residence in Lamesa. She was born on April 14, 1935 in Martindale, Texas. Ramona married Pablo A. Ramos on September 5, 1962 in Lamesa, Texas. Ramona enjoyed sewing, crochet, quilting, tending to her garden and spending time with her grandchildren. She was preceded in death by her husband, Pablo A. Ramos; her parents, Juan and Juanita Baltazar; her brothers, Antonio Baltazar and Cruz Baltazar, Sr.; her sister, Anastacia Moreno. Ramona is survived by her loving family, her sons, Noberto B. Ramos of Lubbock, Texas, Guadalupe Ramos of Lamesa, Texas, John Ramos of River Oaks, Texas; her daughters, Irma Sorola amd Teresa Ramos, both of Lamesa, Texas, Sylvia Ramos of Lubbock, Texas; 11 grandchildren; 16 great-grandchildren; numerous relatives and friends.

The family of RAMONA B. RAMOS created this Life Tributes page to make it easy to share your memories.

A Catholic funeral mass will be celebrated for Ramona B. Ramos,...

Send flowers to the RAMOS family.