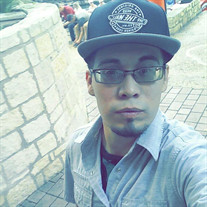 Funeral services for Paul Henry Vela, age 30 of Lamesa, Texas will be held at 7:00 p.m. Saturday May 13, 2017 at the church of Primera Baptist Church with Pastor Larry Gamez officiating. Viewing will be on Saturday May 13, 2017 at Primera Baptist Church starting at 10:00 a.m. Funeral arrangements are under the care and direction of Gonzales Funeral Home of Lamesa, TX. Paul Henry passed away on Monday May 8, 2017 at Covenant Medical Center in Lubbock, TX. He was born on June 23, 1986 in Lubbock, Texas. Paul Henry lived to travel, listening to music. He enjoyed spending time with his son and daughter. Paul Henry was preceded in death by his father, Henry Vela; his sister, Guadalupe Vela; his brother, Ricky Vela. Paul Henry is survived by his mother, Susie Hernandez of Lamessa, TX.; his son Jeremiah Vela of Forth Worth, TX.; his daughter, Trinity Faith Vela of San Angelo, TX.; his brothers, Victor Alvarado of Corpus Christi, TX., Steve Vela of Lamesa, TX.; his sister, Becky Vela of San Angelo, TX.; several family relatives and friends.

The family of PAUL HENRY VELA created this Life Tributes page to make it easy to share your memories.

Send flowers to the VELA family.