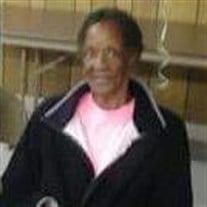 Funeral services to celebrate the life of Nita Mason, age 74 of Lamesa, Texas are set for 2:00 p.m. on Saturday, September 5, 2015 at The Lighthouse Community Center in Lamesa with officiating Pastor Ira Kelley of Mount Olive's Baptist Church. Burial will follow to Dawson County Cemetery. Funeral arrangements are under the care and direction of Gonzales Funeral Home of Lamesa, Texas. Nita passed away on Thursday, August 27, 2015 at Covenant Medical Center in Lubbock, Texas. She was born on August 6, 1941 in Brady, Texas to Frank and Bobbie Mason, where she also attended Brady school, at an early age, Nita and her family moved to Lamesa, where she attended Blackshear school. She worked at the Lamesa Cotton Oil Mill for several years. Nita was a member of St. John's Missionary Baptist Church for over 20 years, then she united with Mount Olive Baptist Church and was a member there until her departure. She volunteered for Meals-on-Wheels at the Dawson County Seniors Citizens Center for many years. Nita is preceded in death by her daughter, Teresa Ann; her parents, Frank and Bobbie Mason; her two sisters, Sammie Mason and Audrey Mason; her two brothers, Dudley Mason and Douglas Mason. Nita is survived by her most loving family, her son, James Mason of Washington State; her three brothers, Tap Mason and wife, Velma Mason of Lamesa, Texas, Billy Mason, Kenneth Mason, both of Lamesa, Texas; her sister, Patsy Mason of Lamesa,Texas; her sister-in-law, Rebecca Mason of Lamesa, Texas; a host of nieces, nephews, relatives and friends.

The family of Nita Mason created this Life Tributes page to make it easy to share your memories.

Funeral services to celebrate the life of Nita Mason, age 74...

Send flowers to the Mason family.