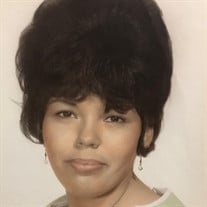 A Catholic funeral mass service of christian burial will be celebrated for Mary Billalobos Fernandez age 70 of Lamesa at 2:00 p.m. Monday, February 18, 2019 at St. Margaret Mary Caholic Church with Father John Rathinam officiating. Interment will follow to Dawon County Cemetery. Funeral arrangements are under the care and direction of Gonzales Funeral Home. Viewing will be held on Saturday February 16th and Sunday February 17th with Rosary prayer services at 7:00 p.m. at Gonzales Funeral Home Chapel. Mary passed away on Thursday, February14, 2019 in Lamesa. She was born on April 13, 1948 in Lamesa. Mary married Emigdio Fernandez on September 1, 1976 in Lamesa. Mary was preceded in death by her son, Rudolph Fernandez; her parents, Ricardo and Frutosa Billalobos; her brother, Henry Billalobos; her sisters, Ramona Lucio, and Eluteria Hernandez; her mother-in-law, Juana Alvarez. Mary worked for many years at The Prophecy until its closing. She then became the keeper of her home and cared for her boys and grandchildren until she became ill in April of 2017. Mary enjoyed spending time with her family, and had a passion for cooking the family's entire meals for Thanksgiving, Christmas and Easter Sunday holidays. She loved traveling to nearby towns to watch her grandsons play basball. Mary was a devoted wife, mother, and grandmother. Mary is survived by her loving family, her husband, Emigdio Fernandez of Lamesa; her sons, Edward Fernandez and wife, Priscilla of Greely, CO., Albert Billalobos and wife, Celia of Lewisville, TX., and George Fernandez and wife, Jennifer of Midland, TX.; her daughter-in-law, Amanda Alvarado of Lubbock, TX.; her brother, Tony Billalobos of Lamesa, Texas; her sister-in-law, Emma Mejia of Lamesa; 13 grandchildren and 1 great-grandchild; numerous family relatives and friends.

The family of MARY BILLALOBOS FERNANDEZ created this Life Tributes page to make it easy to share your memories.

A Catholic funeral mass service of christian burial will be celebrated...