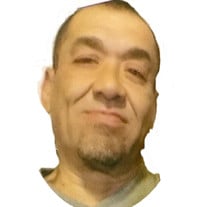 An Inspirational service in memory of Marvin Lee Luera will be held at 10:00 a.m..Thursday June 21, 2018 at Gonzales Funeral Home Chapel with Leonard Macias officiating, followed at 11:00 a.m. with a Catholic funeral mass at St. Margaret Mary Catholic Church with Father Jose Kurumbel officiating. Internment will follow to Dawson County Cemetery. Funeral arrangements are under the care and direction of Gonzales Funeral Home. Marvin Lee passed away on Tuesday June 5, 2018 in Lamesa. He was born on October 30, 1969 in Lamesa. Marvin Lee married Erica Alonzo on May 4, 2009 in Big Spring, TX. He was preceded in death by his daughter, Samantha Lee Luera; maternal grandparents, Inez and Dora Flores; step-father, Amador Vasquez; aunt Mary Delgado; his beloved dog, CoCo. Marvin was a memeber of A.C.T.S., where he attended two retreats. He was a loving father who will be missed. He enjoyed riding around town all day long. Marvin Lee worked many years driving tractors during the cotton season and had worked at Claiborne's. Marvin loved to listen to music with his kids. He was a man of laughter. Marvin was always smiling and laughing. He also enjoyed to cook for his family and friends. Lastly, he was a good artist which his son took after. We are going to miss him everyday. Marvin left us knowing and being excited about his first grandchild. Survivors include, his children, Sabrian Luera, Zydny Luera, and Samson Luera, all of Lamesa; his ex-wife, Erica Alonzo of Lamesa; his mother, Darlene Vasquez of Lamesa; his father and step-mother, Abelino Luera and Julia Luera of Brownfield, TX.; brothers, Joey Luera of Lamesa and Steve Luera of Las Vejas, and Gilbert Elquesba of El Paso, TX.; sister, Melissa Russell of Lamesa; several loving cousins and friends.

An Inspirational service in memory of Marvin Lee Luera will be held at 10:00 a.m..Thursday June 21, 2018 at Gonzales Funeral Home Chapel with Leonard Macias officiating, followed at 11:00 a.m. with a Catholic funeral mass at St. Margaret Mary... View Obituary & Service Information

The family of MARVIN LEE LUERA created this Life Tributes page to make it easy to share your memories.

An Inspirational service in memory of Marvin Lee Luera will be...

Send flowers to the LUERA family.