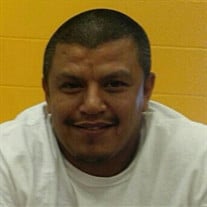 Funeral arrangements for Mario Fidencio Gutierrez, Sr. also known as "Finch", age 38 of Lamesa are under the care and direction of Gonzales Funeral Home. Viewing will be held on Saturday, September 8, 2018 from 10:00 a.m. until 9:00 p.m. at... View Obituary & Service Information

The family of MARIO ( FINCH ) GUTIERREZ SR. created this Life Tributes page to make it easy to share your memories.

Send flowers to the GUTIERREZ family.