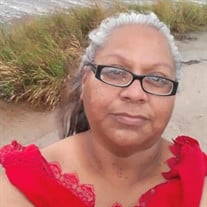 Prayer services for Maricela Andrea Zapata age 49 of Lamesa, TX., will be held at 2:00 p.m. on Sunday, September 5, 2021 at the Lee Roy Colgan Building located at 900 S. Houston Avenue in Lamesa. Maricela passed away on Wednesday, September 1, 2021 at her home in Lamesa. She was born on February 10, 1972 in Lamesa, TX. Cremation arrangements are being handled by Gonzales Funeral Home. Maricela was a magnificent nurse. She loved what she did and had a passion for helping others. She would always go above and beyond for her family, or anyone that crossed her path. She was very inspiring to others. Maricela’s love, personality, and quirkiness touched so many lives. Her hobbies included attending her children, and grandchildren’s extra-curricular activities, and spending every waking moment with her family. Those left to cherish her memory are, her daughter, Tiffany Zapata of Lamesa, TX.; her sons, Stefan Alexander, and Sean Zapata, both of Lamesa, TX.; her father, Rosalio Zapata, and her step-mother, Maggie Zapata of San Antonio, TX.; her mother, Juanita Zapata of Lamesa, TX.; her sister, Paula Zapata of San Antonio, TX.; her brother, Russell Zapata and her sister-in-law, Barbara Zapata of Lubbock, TX.; her step-sisters, Maribel Granado, Isabel Granado, both of Lamesa, TX., Roxanne Hernandez, and Rebecca Hernandez, both of San Antonio, TX.; her nephew, Julian Baltazar, and nieces, Harleigh Aten, both of Lamesa, TX.; her grandchildren, James, Jr., Savannah, Maricela, and Jody Rodea, Malachi Key, Anthony Alexander, and Jeremiah Alexander; numerous relatives and friends.

The family of MARICELA ANDREA ZAPATA created this Life Tributes page to make it easy to share your memories.

Send flowers to the ZAPATA family.