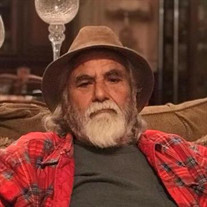 Funeral services for Luis Ruben Hilburn age 71 of Lamesa will be held at 2:00 p.m. Wednesday April 3, 2019 at Primera Baptist Church with Pastors, Larry Gamez and Ernest Sanchez officiating. Interment will follow to the Dawson County Cemetery. Funeral arrangements are under the care and direction of Gonzales Funeral Home. Viewing will be held on Monday from 1:00 p.m. until 9:00 p.m. and Tuesday from 9:00 a.m. until 9:00 p.m. at Gonzales Funeral Home. Luis passed away on Friday March 29, 2019 in Lubbock, TX. He was born on March 9, 1948 in Brownsville, TX. Luis married Celia Sanchez on December 28, 1971 in Lamesa, TX. He was preceded in death by his grand daughter, Myranda Alambar; his father, Wilson Hilburn; his mother, Maria Luebano; his dad, Jose Luebano; his brother, Douglas Hilburn; his sister, Rosie Soria. Luis was a diesel mechanic all of his life. He was a member of Primera Baptist Church. He fought "roosters" for a long time. Luis enjoyed his Estate sales and Garage sales. Luis enjoyed cooking for many people and helped everyone he could. He enjoyed baking birthday cakes every year for his family. Luis also liked dealing cars, trucks, and anything with wheels. Luis lived for his children, then came his grandchildren and they became "his world". His dream was to see his great-grandchildren, and he was blessed to have seen them. Luis is now with his grand daughter Myranda. He loved all of his nieces and nephews as if they were his own and would do anything possible for them. Luis is survived by his wife, Celia S. Hilburn of Lamesa, TX.; children, his son Adrian Hilburn and Rosie of Austin, TX., Valerie Nelson and Dusty of Lamesa, TX., Natalie Hilburn of Lamesa, TX., Adrian Barrera of Midland, TX.; his brothers, Henry Hilburn and Sherry of Dallas, TX., Albert Luebano and Debra of Kerrville, TX.; his sisters, Jolanda Lucero and Willis of Alabama, Josephine Marid of El Paso, TX., Silvia Alvarado of Lamesa, TX., and Choncita Parker of Detroit, Michigan his aunt, Virginia Longoria of Amarillo, TX.; 9 grandchildren and 2 great-grandchildren numerous relatives and friends. Pallbearers, Malik Jackson, Omarion Jackson, Diego Paiz, Dusty Nelson, Mario Rocha, Jessie Enriquez. Honorary Pallbearers, Julio Guerrero, Angel Acosta, Lewis Alambar

The family of LUIS RUBEN HILBURN created this Life Tributes page to make it easy to share your memories.

Funeral services for Luis Ruben Hilburn age 71 of Lamesa will...

Send flowers to the HILBURN family.