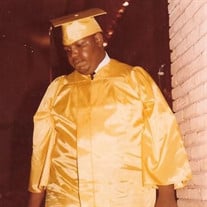 Going home funeral services for Kenneth David Mason age 62 of Lamesa, TX. will be held at 3:00 p.m. Friday, January 17, 2020 at St. John’s Baptist Church with Rev. Ira Kelly officiating. Funeral arrangements are under the care and direction of Gonzales Funeral Home. Kenneth David Mason was born to Frank and Bobbie Mason on October 25, 1957 in Lamesa, TX. Kenneth went to Glory on January 9, 2020 in Lamesa, TX. He is preceded in death by his parents, Frank and Bobbie Mason; brothers, Douglas, Dudley, and Billy Mason; sisters, Sammie Shorts, Audrey Wright, and Nita Mason. Kenneth attended and graduated from Lamesa High School. He participated in the works program in which he started out as a dishwasher and progressed to a Cook/Chef. He worked at the Green Hut Café, Turner’s Café, and Allen’s Galley Restaurant. Kenneth was able to focus on his love for food and making people happy. At an early age Kenneth joined the church. He attended and served at St. John’s Baptist Church where he served the church in the Brotherhood department by participating and teaching. Also, he served by being a transporter for the church activities as well. Kenneth was a faithful member of St. John’s Baptist Church until is heath failed and he was no longer able to physically attend his beloved church. Kenneth is survived by his brother, Jerry “Tap” Mason and his sister, Patsy Mason, both of Lamesa, TX.; and a host of nieces, nephews, friends, and family. Honorary pallbearers, Chris Mason, Jerry (Bo) Mason, Cedrick Mason, Dwight Mason, Dwayne Smith, Dennis Smith, Xavier (Bo) Shorts.

The family of KENNETH DAVID MASON created this Life Tributes page to make it easy to share your memories.

Send flowers to the MASON family.