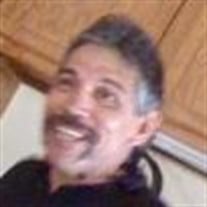 A Catholic funeral mass will be celebrated for Julian Mojicam, age 53 of Lamesa, Texas at 10:00 a.m. on Thursday, January 26, 2017 at St. Margaret Mary Catholic Church with Father John Steven Rathinam officiating and assisted by Deacon Daniel Valenzuela. Interment will follow in Dawson County Cemetery. Funeral arrangements are under the care and direction of Gonzales Funeral Home of Lamesa, Texas. Viewing and visitation is set for Wednesday, January 25, 2017 with a Rosary service at 7:00 p.m at Gonzales Funeral Home Chapel. Julian passed away on Monday, January 23, 2017 at his residence in Lamesa. He was born on June 19, 1963 in Lamesa. Julian had an outgoing personality, he tended to his work, took care of his parents until he became ill. Julian was of the Catholic faith. Julian was preceded in death by his brothers, Johnnie R. Mojica, Rudy R. Mojica, Mariano Mojica, Jr.; his loving companion, Leticia Santos Johnson; his maternal grandparents, Ramon and Casimira Ramirez; his paternal grandparents, Desiderio and Rebecca Mojica. Julian is survived by his family, his son, Julian Mojica, Jr. of Fort Worth, Texas; his daughter, Oralia Mojica of Fort Worth, Texas; his parents, Mariano Mojica, Sr. and Adelaida Mojica of Lamesa, Texas; his brothers, Ruben Mojica of Lamesa, Texas, David Mojica of Snyder, Texas; his sister, Mary Castellano of Big Spring, Texas; four grandchildren.

The family of Julian Mojica created this Life Tributes page to make it easy to share your memories.

A Catholic funeral mass will be celebrated for Julian Mojicam,...

Send flowers to the Mojica family.