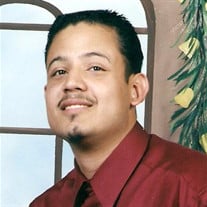 Funeral services for Juan Jose Vasquez, Jr. (Little Joe) age 37 of Lamesa, Texas will be held at 2:00 p.m. Monday, June 17, 2019 at the Lighthouse (Christian Women's Job Corps Building) Community Center located at 1013 S. 2nd Street in Lamesa, Texas with Pastor Juan Joe Vasquez, Sr. officiating. The burial committal service will follow to the Dawson County Cemetery. Funeral arrangements are under the care and direction of Gonzales Funeral Home. Visitation will be held at the Lighthouse Community Center on Saturday, June 14 and Sunday, June 15 with Inspirational Services at 7:00 p.m. Joe passed away on Wednesday, June 12, 2019 in Lubbock, TX. He was born on January 4, 1982. He was born on January 4, 1982 in Lamesa.TX. He was preceded in death by his paternal grandparents, Felipe and Juanita Vasquez and his maternal grandparents, Aurelio and Lucia Rodriguez. Joe enjoyed playing the drums, softball, cooking out. He loved spending time with his family. He was an avid San Francisco 49ers fan. Joe is survived by his parents, Juan Jose Vasquez, Sr. and Gloria Vasquez of Lamesa, TX.; his brother, Sonny Vasquez of Lamesa, TX.; his sisters, Elaine Vasquez of Lamesa,TX., and Gracie Moreno and husband, Bambi Moreno of Lamesa, TX.; his girl-friend, Becky Reynaga and her four children and her grandson all of Lamesa, TX.; numerous nephews, nieces, relatives and friends.

The family of JUAN JOSE VASQUEZ, JR. created this Life Tributes page to make it easy to share your memories.

Send flowers to the VASQUEZ, family.