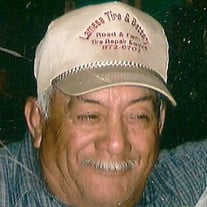 Christian funeral services for Juan "Little John" Garcia, Sr., age 74 of Lamesa, Texas will be held at 2:00 p.m. on Saturday, September 10, 2016 at The Lighthouse Community Center located at 1013 North 2nd Street in Lamesa, with Pastor Nancy Luera officiating. Burial will follow to Dawson County Cemetery. Funeral arrangements are under the care and direction of Gonzales Funeral Home of Lamesa, Texas. Viewing will be on Thursday and Friday at Gonzales Funeral Home. An Inspirational Service will be held on Friday at 7:00 p.m. with Pastor Rudy Ortiz at Gonzales Funeral Home Chapel. Mr. Garcia passed away surrounded by his loving family at his home on Wednesday, September 7, 2016 in Lamesa, Texas. He was born on October 20, 1941 in New Braunfels, Texas. He was preceded in death by his parents, Eustoquio and and Barbarita Garcia; his brother, Roberto A. Garcia. Juan married Gloria Uresti on September 29, 1966 in Lamesa, Texas. Juan was a farmer for over 35 years until his retirement. He loved to go fishing and spending time with his family. Juan was very dedicated and loyal to the church he attended. He was a faithful servant to his Lord. Juan is survived by his most loving family, his wife, Gloria Garcia of Lamesa, Texas; his sons, Juan Garcia, Jr. of Houston, Texas and Ricky Garcia of Lubbock, Texas; his daughters, Benita Rosales and Barbarita Hernandez, both of Lamesa, Texas; his brothers, Margarito Garcia and Mike Garcia, both of New Braunfels, Texas, Jessie Garcia of O'Donnell, Texas, Ernest Garcia of San Marcus, Texas, Ricardo Garcia of Arkansas, Casimiro Garcia of McAllen, Texas; his sisters, Elida Sanez, Rosa Castillo, Leonor Castillo, both of New Braunfels, Texas; 10 grandchildren; 18 great-grandchildren.

The family of Juan "Little John" Garcia Sr. created this Life Tributes page to make it easy to share your memories.

Send flowers to the Garcia family.