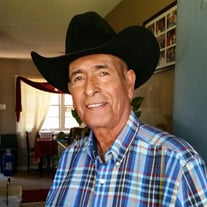 Funeral services for Juan Alvarado, age 72 of Lubbock, Texas and formerly of Lamesa will held at 11:00 a.m. on Saturday, November 4, 2017 at La Trinidad United Methodist Church Texas, with Sammy Espinoza officiating. Interment followed to Dawson County Cemetery. Funeral arrangements are under the care and direction of Gonzales Funeral Home. Viewing will be held from 9:00 a.m. until 9:00 p.m. on Friday, November 3, 2017 at Gonzales Funeral Home Chapel along with an Inspirational service at 7:00 p.m. Juan passed away on Wednesday November 1, 2017 in Lubbock, Texas. He was born on August 8, 1945 in the state of Wisconsin to Juan and Ignacia Alvarado. Juan married Maria Torres on January 7, 1967 in Lamesa. Maria preceded him in death on August 4, 2012. They were married for 45 years. Preceding Juan in death was his wife, Maria Torres Alvarado; his parents; his brothers, Pete Alvarado, Sr. and Abel Alvarado. Juan was full of life and very devoted to his God and family. He was a retired Master-Ginner having worked in the cotton ginning industry many years. On Wednesday November 1, 2017, Juan was finally re-united with the love of his life, Maria.. Juan is survived by his most loving family, his children, Essie Alvarado of Lubbock, Noe Alvarado and wife, Mari of Fort Worth, Texas, Silvia Gonzalez and husband, Ralph of Lubbock and Juan Alvarado of Lubbock; his grandchildren, Ashley, Noe, Tina, Valarie, Lauren and Eva; his brothers and sisters, Tiolio Alvarado of Smiley, Texas, Lupe Lopez of Lubbock, Texas, Juanita Alaniz of Lamesa, Tina Olivarez of Dallas, Texas, Abel Alvarado of Lamesa, Albert Alvarado of Lamesa, Isabel Alonzo of Lamesa, Susie Garcia of Lubbock, Texas, Fide Alvarado of San Angelo, Texas and Maggie Salazar of Lamesa.

The family of JUAN ALVARADO created this Life Tributes page to make it easy to share your memories.

Send flowers to the ALVARADO family.