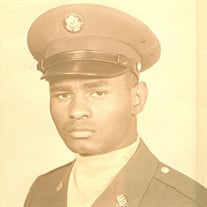 Funeral services for Johnny L. Richardson age 68 of Lamesa will be held at 2:00 p.m. Saturday, July 14, 2018 at Ebenezer Baptist Church with Jackie J. Johnson officiating. Interment will follow to Dawson County Cemetery. Funeral arrangements are under the care and direction of Gonzales Funeral Home. A wake service will be held on Friday, July 13, 2018 from 7:00 p.m. until 8:00 p.m. at Gonzales Funeral Home Chapel. Johnny passed away on Friday, July 6, 2018 in Lamesa. He was born on March 2, 1950 in Lamesa. Johnny married Etta Williams on November 3, 2008 at St. John Baptist Church. He was preceded in death by his father, Charlie Richardson; his grandmother, Gorgie Edwards and his grandfather, Malvin Edwards. Johnny enjoyed reading and drawing. He was a veteran of the US Army. Survivors include, his wife, Etta Richardson of Lamesa; his sons, Steven Richardson of Monahans, TX. and Johnaton Richardson of Houston, TX.; his mother, Bettie Richardson of Lamesa; his brother, Willie Colman of Dallas, TX.; his sisters, Bettie Sims of Dallas, TX., Mary Nations of Roulette, TX., and Ann Newhouse of Allen, TX.; two grandchildren; a host of relatives and friends.

The family of JOHNNY L. RICHARDSON created this Life Tributes page to make it easy to share your memories.

Funeral services for Johnny L. Richardson age 68 of Lamesa will...

Send flowers to the RICHARDSON family.