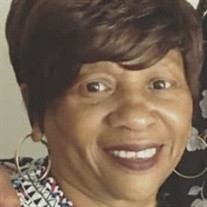 Funeral services for Johnnie Paula Fleming age 62 of Lamesa, TX. will be held at 12:00 noon p.m. on Saturday, January 15, 2022 at Gonzales Funeral Home Chapel with Pastor Jerry Gardner officiating. Burial committal will follow to the Dawson County Cemetery. Funeral arrangements are under the care and direction of Gonzales Funeral Home. Viewing will be held on Friday, January 14, 2022 from 10:00 a.m. until 9:00 p.m. Paula was called home by her Lord on Sunday, January 9, 2022 in Lamesa, TX. She was born on June 19, 1959 in Lamesa, TX. Paula was married to Willie Maxwell. Paula was preceded in death by her son, Garland Fleming; her parents, Marvin and Deloris Fleming; her brother, Maurice Fleming; her sisters, Marva Fleming and Tammie Fleming. She was employed with Medical Arts Hospital from 1979 until 2017, then transitioned into the Home Health medical care working for Sam Parham until she became ill. Paula enjoyed Bingo, playing softball, and she especially loved family time. Those left to cherish Paula’s memory are, her daughters, Kizzie (Sheldon) Bass of Odessa, TX., and Shaunitra (Ismael) Morales of Lamesa, TX.; her husband, Willie Maxwell of Lamesa, TX.; her grandsons, Anthony Jace Burleson, Angel Burleson, , both of Houston, TX., Deonte’ Bass, Jayden Bass, both of Odessa, TX., her grand-daughters, Brianna Cantu of Fort Worth, TX., and Tatanesha Fleming of Odessa, TX.; her great-grand-daughter, Ka’Moni Jones of Odessa, TX.; her sister, Edith Harris of Lamesa, TX.; her brother, Curtis Maxwell of Lamesa, TX.; her niece, Margaret Fleming of Odessa, TX.; Anthony Manuel the father of their children of Midland, TX.; a host of relatives and friends.

The family of JOHNNIE PAULA FLEMING created this Life Tributes page to make it easy to share your memories.

Send flowers to the FLEMING family.