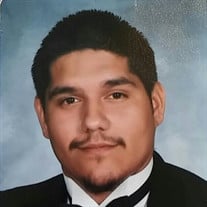 A Memorial service for Jacob Ybanez, age 25 of Lamesa, Texas will be held at 10:00 a.m. on Saturday, October 22, 2016 at the Family Harvest Church located at 512 North 2nd Street in Lamesa with Pastor Joe Rivas officiating. Arrangements are... View Obituary & Service Information

The family of Jacob Ybanez created this Life Tributes page to make it easy to share your memories.

A Memorial service for Jacob Ybanez, age 25 of Lamesa, Texas...

Send flowers to the Ybanez family.