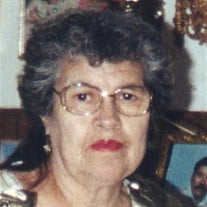 A Catholic funeral service mass will be celebrated for Isabel C. Aguilar, age 86 of Lamesa, Texas at 2:00 p.m., Thursday, May 22, 2014 at St. Margaret Mary Catholic Church with Father Joseph Kurumbel officiating. Burial will follow to Dawson County Cemetery. Funeral arrangements are under the care and direction of Gonzales Funeral Home of Lamesa, Texas. Rosary services willl be at 7:00 p.m. on Tuesday and Wendesday at Gonzales Funeral Home Chapel. Isabel passed away on Monday morning, May 19, 2014 at her home in Lamesa. She was born on November 20, 1927 in Loraine, Texas. Isabel married Juan Aguilar in 1948. She was a homemaker and a member of St. Margaret Mary Catholic Church. She was preceded in death by her husband, Juan Aguilar, Sr.; hers sons, Esidro Aguilar, Luis Aguilar, Jose Aguilar and Baltazar Aguilar; her sisters, Felipa Diaz and Hilaria Hernandez. Isabel is survived by her sons, John Aguilar, Lupe Aguilar and Reynaldo Aguilar, all of Lubbock, Texas, Ramon Aguilar, Amador Aguilar, Antonio Aguilar, Luis Aguilar, all of Lamesa, Texas; her daughters, Margarita Ortega, Mary Bara, Anita Portillo and Susie Baltazar, all of Lamesa, Texas; fifty-six grandchildren and many great-grandchildren and great-great-grandchildren

The family of Isabel C. Aguilar created this Life Tributes page to make it easy to share your memories.

A Catholic funeral service mass will be celebrated for Isabel...

Send flowers to the Aguilar family.