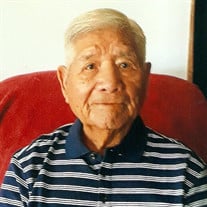 A funeral mass will be celebrated for Hilario Torres age 90 of Lamesa, Texas at 10:00 a.m. Friday, May 10, 2019 at St. Margaret Mary Catholic Church with Father Joseph Kurumbel and Father Martin Pena officiating. Burial committal service will follow to the Dawson County Cemetery. Funeral arrangements are under the care and direction of Gonzales Funeral Home of Lamesa, Texas. Viewing will be held Thursday, May 9, 2019 with a Rosary prayer service starting at 7:00 p.m. at Gonzales Funeral Home Chapel. Hilario passed away of a natural illness and surrounded by his loving family at his home on Wednesday, May 8, 2019. He was born on September 15, 1928 in San Luis Potosi, Mexico. He was the son of Hilarion Torres and Juana Castro. Hilario married Maria Carmen Cruz on October 13, 1958 in Mexico. He was preceded in death by his parents and two brothers. Hilario was a retired farmhand since the 1980's. His favorite hobby was cultivating and planting pepper, tomato plants, and fruit trees in his big gardens. He enjoyed spending precious time with his grandchildren and great-grandchildren. Hilario was an accomplished musician of the accordion and guitar. He enjoyed listening to his sons and grandchildren playing music. Hilario was a member of St. Margaret Mary Catholic Church. Hilario is survived by his family, his wife, Maria Carmen Torres of Patricia, Texas; his children, Jose Isabel Torres, Concepcion Banuelos and husband, Samuel Banuelos II, Porfirio Torres, Hilario Torres and wife, Alicia Torres, Alfredo Torres, Jesus Torres and wife, Norma Torres, and Leticia Chavez and husband, Enrique Chavez; 18 grandchildren and 7 great-grandchildren; numerous relatives and friends.

The family of HILARIO TORRES created this Life Tributes page to make it easy to share your memories.

A funeral mass will be celebrated for Hilario Torres age 90 of...

Send flowers to the TORRES family.