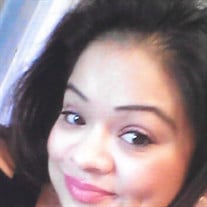 Funeral services for Gracie Enriquez, age 34 of Arlington, Texas are set for 10:00 a.m., Saturday, October 17, 2015 at the church Faith of God In Christ with Pastor Ramiro Lumbreas officiating. Burial will follow to Lamesa Memorial Park. Funeral arrangements are under the care and direction of Gonzales Funeral Home of Lamesa, Texas. Viewing and visitation are Friday, October 16, 2015 today until 9:00 p.m. at Gonzales Funeral Home Chapel. Gracie died on Friday, October 9, 2015 in Ft. Worth, Texas. She was born on November 20, 1980 in Lamesa, Texas. Gracie moved to Ft. Worth in 2002 and later moved to Arlington. She was employed with Wal Mart for 17 years. Gracie is survived by her family, her three daughters, Karrie Lorae Rodriguez of Lubbock, Texas, Iraya Butler and Qallah Butler, both of Arlington, Texas; her mother, Emelda Lopez of Lamesa, Texas; her brother Jesse Enriquez; her beloved niece and nephew, Michelle Enriquez and Steven Enriquez; her close friend, Kaylon Hodge.

The family of Gracie Enriquez created this Life Tributes page to make it easy to share your memories.

Send flowers to the Enriquez family.