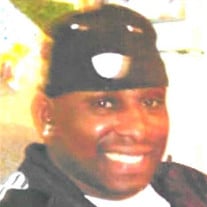 Funeral services to celebrate the life of Garland Fleming, age39, of Lamesa, Texas will be held at 2:00 p.m. on Monday, February 9, 2015 at The Lighthouse Community Center of Lamesa, Texas with the Rev. Arthur Kelly officiating. Interment will... View Obituary & Service Information

The family of Garland Fleming created this Life Tributes page to make it easy to share your memories.

Funeral services to celebrate the life of Garland Fleming, age39,...

Send flowers to the Fleming family.