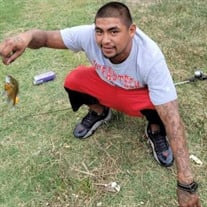 Funeral services for Frank Tello age 28 of Lubbock, TX., and formerly of Lamesa, TX., will be held at 2:00 p.m., Tuesday, September 21, 2021 at Gonzales Funeral Home with Pastor Liboryo Iglesias officiating. Burial committal will follow to the Dawson County Cemetery. Funeral arrangements are under the care and direction of Gonzales Funeral Home. Visitation and viewing will be held at Gonzales Funeral Home on Sunday, September 19, 2021 starting at 2:00 p.m. until 9:00 p.m., and Monday, September 20, 2021 from 9:00 a.m. until 9:00 p.m. with an Inspirational Service starting at 7:00 p.m., at Gonzales Funeral Home Chapel. Frank passed away on Saturday, September 12, 2021 in Lubbock, TX. He was born on September 21, 1992 in Lubbock, TX. Frank was preceded in death by his father, Frank Tello, Sr.; his grandmother, Lola Tello; his great-grandparents, Frank and Jovita Samora, and great-grandfather, Juan Rivas, Sr. Frank was a son, brother, father, husband, uncle, nephew, cousin, and friend to many. He was a very hard worker, and was employed as a construction framer, and had worked in fast-food, landscaping, and an automotive mechanic. Frankie’s favorite hobbies were spending time with his family, fishing, driving, and listening to music. He was a “kid-at-heart”. Frankie was always laughing, smiling, and joking around. He also loved helping others any way he could. He was somebody you could count on even if it was last minute, he was there to help. Frankie was the sweetest, kindest, funniest, most caring, and loving person you could ever know. He will always be loved and missed by his family, friends, and many others that knew him. Frankie is survived by his wife, Maribel Tello of Lubbock, TX.; his three children, Serena Tello of Lamesa, TX., and Ivan Tello, and Stephanie Torres, both of Lubbock, TX.; his mother, San Juanita Rivas of Lamesa, TX.; his brother, Orlando Tello of Lamesa, TX.; his grandparents, Gilberto and Luisa Rivas of Lamesa, TX.; his uncles and aunts, Joe and Sandra Montez of Lamesa, TX., Romeo and Hilda Mendoza of Odessa, TX.; Raymond and Daniela Rivas of Lubbock, TX.; his nephews, Orlando Tello, Jr., and Frankie Miguel Tello, both of Lamesa, TX.; his nieces, Ariyana Tello, and Naomi Tello, both of Lamesa, TX.; numerous relatives and friends.

The family of FRANK TELLO JR. created this Life Tributes page to make it easy to share your memories.

Funeral services for Frank Tello age 28 of Lubbock, TX., and...

Send flowers to the TELLO family.