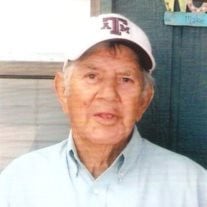 A Catholic funeral service mass will be celebrated for Felix C. Toscano, Sr. of Lamesa, Texas at 2:00 p.m. on Monday, February 10, 2014 at St. Margaret Mary Catholic Church. Burial will follow to Dawson County Cemetery. Funeral arrangements are under the care and direction of Gonzales Funeral Home of Lamesa, Texas. Rosary services will be held at 7:00 p.m. on Saturday and Sunday nights at Gonzales Funeral Home Chapel. Mr. Toscano passed away on Friday night, February 7, 2014 at his home with his family by his side. He was born on July 28, 1934 in Campbellton, Texas. Felix married Dora Lopez on May 28, 1965 in Lamesa, Texas. Felix was employed with Lamesa Delinting Company for Forty-two years. He spent as much of his free time with his wife, children and grandchildren. He enjoyed outdoor activities such as working his lawn and took much pride in his yard appearance as his vegetable garden as well. His hobbie's included going to the Casino in Hobbs, NM with his wife, listening to music and dancing all night long with his lovely wife Dora. Felix also enjoyed playing cards, watching baseball games and just simply... enjoyed life. Married to Dora for Forty-eight years. Felix was well known to the community after having lived in Lamesa for Sixty-seven years. He will truely be missed. Preceded him in death were his parents, Seferino Toscano and Corina Contreras Toscano; his sons, Rudy Lopez and wife, Carmen of Midland, Texas, Felix C. Toscano, Jr. and wife, Rachael of Lamesa, Texas, Bobby Toscano and wife, Lorena of Midland, Texas, Eddie Toscano of Lamesa, Texas, Jerry Toscano and wife, Michelle of Midland, Texas; his daughters, Nora Acosta and husband, Albert of Lamesa, Texas, Yolanda Ramos of Midland, Texas, Lora Iglesias and husband, Rudy of Midland, Texas, Norma Garza and husband, Carlos of Midland, Texas, Lisa Toscano of Midland, Texas; twenty-nine grandchildren; nine great-grandchildren.

The family of Felix C. Toscano Sr. created this Life Tributes page to make it easy to share your memories.

A Catholic funeral service mass will be celebrated for Felix...

Send flowers to the Toscano family.