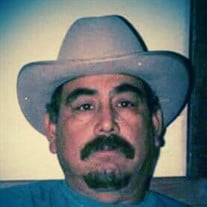 Funeral services for Felipe Ramirez, age 73 of Lamesa, Texas will be held at 11:00 a.m. on Monday, December 5, 2016 at the Primera Baptist Church in Lamesa with Pastor Larry Gamez officiating. Burial will follow to Dawson County Cemtery. Funeral arrangements are under the care and direction of Gonzales Funeral Home of Lamesa, Texas. Viewing will be held on Friday, December 2, 2016 at Gonzales Funeral Home Chapel with a Rosary service at 7:00 p.m. Viewing will be held on Saturday, December 3, 2016 at the Primera Baptist Church with an Inspirational Service at 7;00 p.m. Viewing on Sunday, December 4, 2016 starting at 1:00 p.m. at the Primera Baptist Church with an Inspirational Service at 7:00 p.m. Mr. Ramirez passed away at his home on Wednesday, November 30, 2016 in Lamesa. He was born on May 29, 1943 in Lamesa. Felipe maried Mary Biera on November 8, 1961 in Lamesa. Mary preceded him in death on October 24, 2016. Felipe was a retired farmer and oil field operator. He lived a life dedicated to making sure his family was well taken care of. Felipe had an admirable love for his family, friends and work ethic. He was preceded in death by his wife, Mary Biera Ramirez; his parents, Anselmo and Julia Ramirez; his sons, Xavier Ramirez, Gabriel Ramirez; his great-grandson, Jeremiah Perez; his great-grand-daughter, Josiah Ramirez; his brothers, Gregory Ramirez, Erminio Ramirez. Felipe is survived by his most loving family, his daughters and sons-in-law, Irene Hernandez and Jimmy Hernandez, Lucy Gutierrez and Peter Gutierrez, Lydia Aguilar and Gilbert Aguila, all of Lamesa, Texas, Gloria Ramirez and Ricky Perez of Andrews, Texas; his sisters, Rita Deleon and husband, Mario Deleon of Big Spring, Texas, Mary Parra and Janie Ogeda, both of Lamesa, Texas; his brothers, Marcello Ramirez and wife, Stella of California, Anselmo Ramirez, Jr. and wife, Carmen of San Diego, California, Raul Lugan of Big Spring, Texas; 12 grandchildren; 19 great-grandchildren.

The family of Felipe Ramirez created this Life Tributes page to make it easy to share your memories.

Send flowers to the Ramirez family.