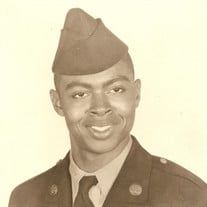 Chapel funeral services with US ARMY funeral honors for Farris Henry High, Sr., age 78 of Lamesa, Texas will be held at 1:00 p.m. on Thursday, February 25, 2016 at Gonzales Funeral Home, with Chaplin Sarita Cooley officiating. Funeral arrangements are under the care and direction of Gonzales Funeral Home of Lamesa, Texas. Viewing will be held on Thursday from 8:00 a.m. until 1:00 p.m. with the funeral service starting at 1:00 p.m. Farris passed away on Saturday, February 20, 2016 at his home in Lamesa with family and friends by his side. He was born on January 7, 1938 in Cameron, Texas. Farris and Eva Robles made a wonderful life together for 42 years in Lamesa. He was preceded in death by his father, James Oliver High and his mother, Willie Mae Rosemond; his first wife, Juanita Gonzales; his brothers, James D. High, Harold High and Bubba High. Farris worked for the City of Lamesa as a heavy equipment operator and later was employed by Dawson County's Precinct 1. He was an excellent fisherman and gardener. Farris served in the US Army and was honorably discharged from the Military in 1960. He was a truck driver. Farris loved to be around family and friends. Farris is survived by his family, his wife, Eva Robles High of Lamesa Texas; his sons, Farris H. High, Jr. and wife, Dinah High of California and Carlos B. High of Waco, Texas; his daughters, Felicia B. High, Regina P. High, Zena L. Jones and husband, Golden Jones, all of Wausau, WI and Eva Marie High of Lamesa, Texas; his Ella Mae High of Sanford, AZ; 12 grandchildren; 10 great-grandchildren; a host of nieces and nephews from all over the USA.

The family of Farris Henry High, Sr. created this Life Tributes page to make it easy to share your memories.

Chapel funeral services with US ARMY funeral honors for Farris...

Send flowers to the High family.