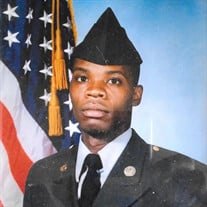 Celebration of Life Memorial Services for both Curtis Bolton Maxwell and Ernest Clifton Maxwell will be held at 2:00 p.m. on Saturday, February 12, 2022 at Mount Olive Baptist Church at 1201 S. Detroit St. in Lamesa, TX. Ernest Clifton Maxwell was called home on Thursday, February 3, 2022 in Lamesa, TX. Ernest was born December 29, 1969 in Lamesa, TX. He was preceded in death by his father, Webster Edwards, and his son, Tommy Williams, Jr. Ernest loved to play and watch Basketball. He loved the Lamesa Golden Tornadoes. Ernest played basketball all 4 years of his high school years, and loved the NBA and Football. After graduating high school in 1998, he then went to join the US Army Reserves where he served 8 years in service, after his service, Ernest was then employed with the Texas Department of Criminal Justice system, where he became Sergeant at Arms. Ernest worked doing odd-jobs to make life work. He worked for the US Silica Lamesa Sand Plant for over one year until his life ended. Those left to cherish his memories are, his daughter, Te’a Ornelas and her husband, Vincent Ornelas, his grandchildren, Camden Maxwell and Alonzo Ornelas, all of Breckenridge, TX.; his mother, Christine Maxwell of Lamesa, TX.; his brothers, Eugene Maxwell of Beville, TX., Daniel Maxwell of Lamesa, TX., and Robert Maxwell of Midland, TX.; and a host of nieces, nephews, aunts, uncles, and friends.

The family of ERNEST CLIFTON MAXWELL created this Life Tributes page to make it easy to share your memories.

Celebration of Life Memorial Services for both Curtis Bolton...

Send flowers to the MAXWELL family.