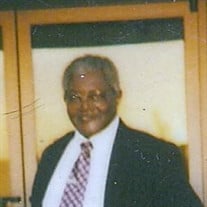 Funeral services for Mr. Elish Leary, age 91 of Lamesa, Texas will be held at 1:00 p.m. on Tuesday, December 6, 2016 at the Lighthouse Community Center with Rev. Eugene Gentry officiating. Burial will follow to Lamesa Memorial Park. Funeral arrangements are under the care and direction of Gonzales Funeral Home of Lamesa, Texas. Viewing will be held on Sunday and Monday with a family visitation hour set for Monday from 7:00 p.m. until 8:00 p.m. at Gonzales Funeral Home. Mr. Leary passed away peacefully at his home on Monday, November 28, 2016 in Lamesa. He was born on January 14, 1925 in Panola County, Texas. Elish married Louise Jernigan on November 25, 1950 in Lovington, New Mexico. Mr. Leary was preceded in death by his son, Calvin Larry, his daughters, Doris Ann Larry, Margelene Larry; his brothers, Lonnie Leary, Johnny Leary; his sister, Izora Ingram. Elish worked in farming for many years. He loved the Lord. He attended Ebenezer Baptist Church, St. John Missionary Baptist Church, El Shaddai Baptist Church for many years. He served as a faithful deacon for many years. His church until his passing was at Mt. Olive Baptist Church with his pastor Ira Kelly. Elish is survived by his most loving family, his wife, Louise Leary of Lamesa, Texas; his daugthters, Francine Atchinson of Lamesa, Texas, Mary Smith Land and Shirley Ann Kagunda, both of Ft. Worth, Texas, Linda Maxwell and Peggy Hutchinson, both of Fargo, ND; 22 grandchildren; 111 great-grandchildren; 15 great-great-grandchildren; a host of nieces and nephews.

The family of Elish Leary created this Life Tributes page to make it easy to share your memories.

Send flowers to the Leary family.