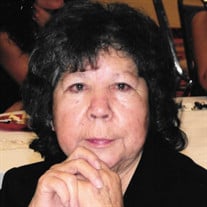 A Catholic funeral service Mass will be celebrated for Elida Guicoza, age 79 of Lamesa, Texas, at 2:00 p.m. on Tuesday, October 6, 2015 at St. Margaret Mary Catholic Church with Father Jose Kurumbel officiating. Burial will follow to Dawson County Cemetery. Funeral arrangements are under the care and direction of Gonzales Funeral Home of Lamesa, Texas. Viewing and visitation Sunday and Monday with Rosary service set at 7:00 p.m. at Gonzales Funeral Home Chapel. Elida passed away on Saturday, October 3, 2015 in Lamesa, surrounded by her most loving family. She was born on June 4, 1936 in Victoria, Texas. She was preceded in death by her husband, Victor Guicoza; her son, Leroy Urias, Sr.; her parents, Guadalupe and Celia Cortez; her siblings, Olivia Rivera, Emma Diaz, Lydia Cortez, Lupe Cortez, Arthur Cortez, Jessie Cortez, Roberto Cortez, Ramiro Cortez, Manuel Cortez. Elida was always a hard worker, she owned and operated La Fondita Restaurant in Lamesa for many years until she retired from the restaurant business. She was a devout Catholic and a member of St. Margaret Mary Catholic Church. She was always ready to help those in need and very often brought prepared meals to many families in their dificult times. She enjoyed playing BINGO and going to the Casino and loved music. Elida's most favorite times were spending time and special occassions with all her family that she loved dearly. Elida was immensely loved and respected by her family and was considered the Head of the family. Elida will be greatly missed by her family and friends. Elida is survived by her most loving family, Chavela Meador and husband, David Meador of Lamesa, Texas, Rosa Cardenas of Buck Eye, Arizona, Nancy Guicoza of Lamesa, Texas, Johnny Lopez and wife, Griselda Lopez of Lubbock, Texas, Peggy Lopez of Lubbock, Texas, Leonard Lopez of Lamesa, Texas; her siblings, Lee Cortez, Sr. and wife, Elvia Cortez of Lamesa, Texas, Dalia Gonzales and husband, Emilio Gonzales, Sr. of Lamesa,Texas, and Viola Cortez, Carolina Cortez, Freddie Cortez and Rudy Cortez, all of Lamesa, Texas; 25 grandchildren; 51 great-grandchildren; numerous nieces and nephews.

The family of Elida Guicoza created this Life Tributes page to make it easy to share your memories.

A Catholic funeral service Mass will be celebrated for Elida...

Send flowers to the Guicoza family.