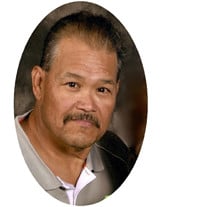 Funeral services for Eddie "Eddie Boy" Galindo, age 54 of Wink, Texas will be held at 2:00p.m. on Friday, December 9, 2016 at the Primera Baptist Church of Lamesa, Texas. Officiating will be Pastor Joseph Mohler and Pastor Larry Gamez. Burial will follow to Dawson County Cemetery. Funeral arrangements are under the care and direction of Gonzales Funeral Home of Lamesa, Texas. Viewing will be held on Thursday, Decemer 8, 2016 at Primera Baptist Church. Eddie passed away on Tuesday, December 6, 2016 at Winkler County Memorial Hospital in Kermit, Texas. He was born on October 30, 1962 in Lamesa, Texas. Eddie married Melissa Martinez on April 8, 1988 in Seminole, Texas. He was preceded in death by his Lamesa, Texas grandparents, Pete Galindo, Sr. and Georgia Galindo and also Jose and Elvira Rivera. Eddie was an avid fan of the Dallas Cowboys. He was a retired welder. Eddie served as a Deacon at Community Baptist Church. Eddie is survived by his family, his wife, Melissa Galindo of Wink, Texas; his two sons, Andy Galindo and Adrian Galindo, both of Wink, Texas; his daughter-in-law, Amber Galindo of Wink, Texas; his parents, Pete and Vera Galindo of Kermit, Texas; his three sisters, Sylvia Escobedo and husband Reno of Seminole, Texas, Sara Navarro and husband Hector, Sandra Galindo, all of Kermit, Texas; his grandsons, Ezekiel Galindo and Teagan Hernandez, both of Wink, Texas; his grand-daughters, Aubreigh Gallegos and Brynleigh Gallegos, both of San Angelo, Texas; a host of relatives and friends.

The family of Eddie "Eddie Boy" Galindo created this Life Tributes page to make it easy to share your memories.

Send flowers to the Galindo family.