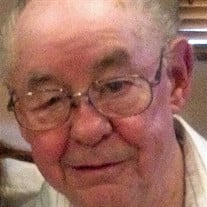 Graveside funeral services for Dwain E. Jeffcoat, age 81 of Lamesa, Texas will be held at 2:00 p.m. on Tuesday, August 16, 2016 at Lamesa Memorial Park cemtery, officiating will be Rev. Terry W. Jones, D.M., L.E.O.C. Funeral arrangements are under the care and direction of Gonzales Funeral Home of Lamesa, Texas. Mr. Jeffcoat passed away on Friday, August 12, 2016 at Sage Healthcare Center in Lamesa, Texas. He was born on April 4, 1935 in Quemado, Texas. He married Marilyn Jones on June 2, 1962 in Lamesa, Texas. Dwain attended Flower Grove school and then graduated from Lamesa High School in 1954. He served from 1954 to 1957 in the ARMY Ready Reserve. Dwain retired from the Corpus Christi ARMY Depot in 1993. He served in the US Air Force from 1957 until 1961. He loved his "Fur Baby" and enjoyed watching the games shows of "The Price is Right" and "Jeopordy" on TV. Dwain was preceded in death by his parents, M.E. (Spud) and Mary Jeffcoat; his sister, Myrlene Yarbrough. Dwain is survived by his wife, Marilyn Jeffcoat of Lamesa, Texas; his nephew, James (Shirley) Nuegent of Corpus Christi, Texas; his niece, Janice (Steve) Sutton of Lubbock, Texas; numerous nieces and nephews.

The family of Dwain E. Jeffcoat created this Life Tributes page to make it easy to share your memories.

Send flowers to the Jeffcoat family.