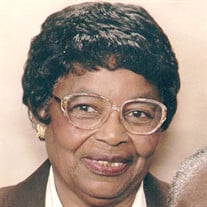 Funeral services for Dorothy Jean Conaway, 88 of Lamesa, Texas will be held at 2:00 p.m. on Saturday, June 11, 2016 at the Lamesa Church of Christ with Calvin Smith and Gary Jones officiating. Interment will follow to Lamesa Memorial Park. Funeral arrangements are under the care and direction of Gonzales Funeral Home of Lamesa, Texas. Family visitation hour will be on Friday, June 10, 2016 from 7:00 p.m. until 8"30 p.m. at Gonzales Funeral Home Chapel. Dorothy passed away on Wednesday, June 8, 2016 in Lubbock, Texas. She was born on May 31, 1928 in Harrison County, Texas. Dorothy married Jessie (Honey) Conaway on February 18, 1950 in Lamesa, Texas. She was preceded in death by her beloved husband, Jessie (Honey) Conaway, Sr.; her parents, Archie and Sedahlia Smith; her sister, Maranda Butler; her brothers, Arnold Smith, Arelious Smith, David Smith, Sr.; her son-in-law, Billie Lemons. In her early life, Mrs. Conaway did domestic work and worked in the nursing field. In 1974 she complete a course at Permian General Hospital School of Vocational Nursing. For several years she was employed at Medical Arts Hospital in Lamesa and then did private patient care until her retirement. Doroty was on the Board of Directors for Lamesa Senior Citizens Center and was a volunteer for numerous civic and church organizations. One of Mrs. Conaways' greatest enjoyments in life was to bake for other people. Many people benefied from her talent in this area and enjoyed her delicious cakes and pies. She also loved to crochet and gave away many of her beautiful creations to friends and family. Above all else, Dorothy loved God, her biological family, her church family and her multitude of wonderful friends. Mrs. Conaway is survived by her loving family, her sons, John L. Collins of Truloca, CA, Earnest E. Collins and wife, Judy of Apopka, FL, Jessie Conaway, Jr. of Lubbock, TX; her daughters, Nina Anderson and husband, Terry of Lubbock, TX, Janet Conaway Lemons of Lubbock, TX; her sisters, Magnolia Terry of Roswell, NM, Jean Brown of Lamesa, TX, Archie M. Brown of Lubbock, TX, her step-sister, Reva Edwards of Galena Park, TX; her brother, Willard C. Smith of Sacramento, CA; 46 grandchildren; 11 great-grandchildren; a host of niecess, nephews, relatives and friends.

Funeral services for Dorothy Jean Conaway, 88 of Lamesa, Texas will be held at 2:00 p.m. on Saturday, June 11, 2016 at the Lamesa Church of Christ with Calvin Smith and Gary Jones officiating. Interment will follow to Lamesa Memorial Park. Funeral... View Obituary & Service Information

The family of Dorothy Jean Conaway created this Life Tributes page to make it easy to share your memories.

Send flowers to the Conaway family.