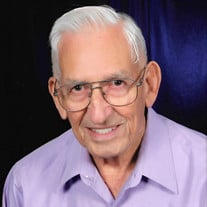 Dionicio Garza, Sr., of Lamesa, Texas, at the tender age of 88, went to be with the Lord on Saturday, December 12, 2015, after suffering a massive stroke. A celebration of his life with a funeral mass service will be at St. Margaret Mary Catholic Church, at 10:00 a.m., on Wednesday, December 16, 2015, with Father Joseph Kurumbel officiating. Burial will follow to Dawson County Cemetery. Funeral arrangements are under the care and direction of Gonzales Funeral Home of Lamesa, Texas. Visitation and viewing will be held at Gonzales Funeral Home on Monday and Tuesday from 9:00 a.m. until 9:00p.m., with a Rosary service to be held at 7:00 p.m. Dionicio was known to many of his friends and family by Nicho or Nick. He was one of seven children and was born on March 3, 1927 in DeWitt County, Cuero, Texas to Santos and Romana Garza. Although he and his brothers all grew-up working on a farm, he found time and love for baseball. As teenagers, he and his youngest brother were both scouted and played in the Texas Gulf Coast League. At the age of 25, he married the love of his life, Santos Salinas. They moved to Lamesa, Texas in 1957 and never left. He was a self taught hard working man that never met a stranger, had a knack for remembering and reciting math riddles and was a great "story teller". Nicho is survived by his bride, Santos Garza of 63 years of Lamesa, Texas; and sons, Serapio (Sonny) Garza and spouse, Sylvia of Lubbock, Texas and Dionicio Garza, Jr. of Lamesa, Texas. He had six grandchildren, Erik Garza and spouse Cindy, Erin Garza, Stephen Garza and his partner, Nathan, Timothy Garza, Ausha Sambrano and husband, Chris, and Joshua Garza and spouse Lindsay. In addition, he is survived by two great-grandchildren, Madisyn and Ayden, and a brother, Panfilo Garza and spouse, Mary of Lamesa, Texas. He is preceded in death by his parents; his sister, Celita; his brothers, Prudencio, Martin, Santos, Gilberto and Valente; his step-brother, Celso Garza; his step-sister, Petra Cano. We extend our most sincere special thanks to our dear friend, Dr. Robert Ordonez, his outstanding office staff and all of the doctors and nurses at Covenant Medical Center in Lubbock, Texas.

Dionicio Garza, Sr., of Lamesa, Texas, at the tender age of 88, went to be with the Lord on Saturday, December 12, 2015, after suffering a massive stroke. A celebration of his life with a funeral mass service will be at St. Margaret Mary Catholic... View Obituary & Service Information

The family of Dionicio Garza, Sr. created this Life Tributes page to make it easy to share your memories.

Send flowers to the Garza, family.