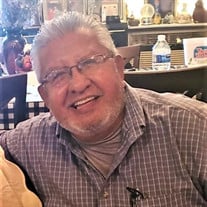 A Catholic funeral mass service will be celebrated for Deacon-Daniel Valenzuela, Sr. age 69 of Lamesa, TX., at 10:00 a.m. on Saturday, October 2, 2021 at St. Margaret Mary Catholic Church. Bishop Robert Coerver of the Diocese of Lubbock, TX. will officiate, along with Father Chacko Thadathil and Father Joseph Kurumbel, with Deacon Saul Hernandez assisting. Burial committal will follow to the Dawson County Cemetery. Funeral arrangements were under the care and direction of Gonzales Funeral Home. Viewing and visitation will be held at St. Margaret Mary Catholic Church together with Sgt. Daniel Valenzuela, Jr., on Thursday, September 30, 2021 from 2:00 p.m. until 9:00 p.m., and Friday, October 1, 2021 from 10:00 a.m. until 9:00 p.m. with Rosary prayers services starting at 7:00 p.m. Daniel passed away on Sunday, September 26, 2021 in San Antonio, TX. He was born on July 21, 1952 in Gomez Palacio Durango Mexico. Daniel married Susana Uvalle on March 1, 1980 in St. Margaret Mary Catholic Church in Lamesa, TX. He was preceded in death by his son, Daniel Valenzuela, Jr.; mother, Anita Montero Valenzuela; and his brother, Manuel Valenzuela; his mother-in-law, Andrea Iglesias Uvalle. Daniel was a member of St. Margaret Mary Catholic Church for over 59 years, and on December 8, 1996 was Ordained a Deacon in the Catholic Church. He was a Klondike high school graduate Class of 1971, where he enjoyed playing Tennis. Daniel became a U.S. Citizen in 1975. He was a member of the Lions Club, served on the Lamesa City Council, volunteered for many years at TDCJ/ Texas Department of Criminal Justice, and was employed as a Chaplin for TDCJ for over 16 years where he helped form Retreats for the inmates as well induct them into the Catholic Faith through the Rite of Christian Initiation of Adults (RCIA). Daniel was very involved in his parish and was a member of Los Cursillistas, member of the Parish Council, church finance committee, a CCE teacher, alter server sponsor, helped with Confirmation Retreats, and helped organize the big annual church Jamaica events. Daniel was a true dedicated servant to his church community. He enjoyed music, working in the yard, football, soccer games, and attending music concerts with his beloved family, and most of all, he loved his grandchildren. Deacon-Daniel is survived by his wife, Susana Uvalle Valenzuela of Lamesa, TX.; her daughters, Mayte Meza (husband, Rick), Maricruz Valenzuela (Brandon), and Daniela Valenzuela, all of Lamesa, TX.; her daughter-in-law, April Valenzuela of Odessa, TX.; his father, Juan Valenzuela, Sr. of Lamesa, TX.; his brothers, Juan Valenzuela, Jr. (wife, Maria), Gume Valenzuela (wife, Carolina) of San Antonio, TX., Gus Valenzuela (wife, Liliana) of Dallas, TX.; his sisters, Virginia Valenzuela, and Anita Herrera (husband, Martin), all of Lamesa, TX.; 16 grandchildren, and 3 great-grandchildren; church families, numerous relatives and friends.

The family of DEACON-DANIEL VALENZUELA SR. created this Life Tributes page to make it easy to share your memories.

A Catholic funeral mass service will be celebrated for Deacon-Daniel...

Send flowers to the VALENZUELA family.