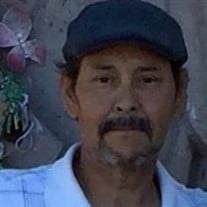 A private Catholic funeral mass of Christian burial will be celebrated for Danny Lozada age 57 of Lamesa, TX. at 2:00 p.m. Saturday March 21, 2020 at St. Margaret Mary Catholic Church with Father Joseph Kurumbel officiating. Interment will follow to the Dawson County Cemetery. Funeral arrangements are under the care and direction of Gonzales Funeral Home. Visitation will be held on Friday, March 20, 2020 at Gonzales Funeral Home. Danny passed away peacefully at his home in Lamesa on Wednesday, March 18, 2020. He was born on June 10, 1962 in Lamesa. Danny married Nancy Castillo on January 15, 1983 in Lamesa. He was preceded in death by his father, Simon Lozada, Sr.; his brother, Tony Lozada. Danny enjoyed singing, handing out with family and friends, and spending precious time with his grandsons. He was a “die hard” Dallas Cowboys fan. Danny is survived by his wife, Nancy Lozada of Lamesa; his daughter, Mandee Lozada of Lamesa; his sons, Isaac Lozada of Lamesa, and Mark Lozada of Austin, TX.; his grandsons, Draven and Luke Chavez of Lamesa; his mother, Julia Lozada of Odessa, TX.; his brothers, Simon Lozada of Lubbock, TX., and Henry Lozada of Lubbock, TX.; his sister, Belinda Lozada Looney of Odessa, TX.; numerous family relatives, and friends.

The family of DANNY LOZADA created this Life Tributes page to make it easy to share your memories.

A private Catholic funeral mass of Christian burial will be celebrated...

Send flowers to the LOZADA family.