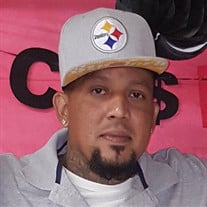 The family of DANIEL "Baby Danny" HILBURN Jr. created this Life Tributes page to make it easy to share your memories.

A Catholic funeral mass will be celebrated for Daniel Hilburn,...

Send flowers to the HILBURN family.