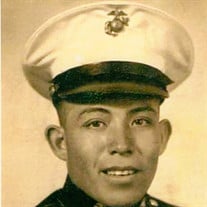 A Catholic funeral mass will be celebrated for Christobal H. (Chris) Rodriguez, Sr. age 93 of Lamesa and formerly of Welch, TX. at 10:00 a.m. Monday July 2, 2018 at St. Margaret Mary Catholic Church with Father Paul Karieakatt officiating. Interment with US Military funeral honors will follow to Dawson County Cemtery. Funeral arrangements are under the care and direction of Gonzales Funeral Home of Lamesa, Texas. Viewing will be held on Saturday and Sunday with Rosary prayer services at 7:00 p.m. at Gonzales Funeral Home Chapel. Christobal passed away on Thursday June 28, 2018 in Lamesa. He was born on July 30, 1924 in New Braunfels, TX. Chris married Isabel Garza on November 17, 1946 in Lamesa. They were married 60 years at the time of his wife's Isabel's death. Chris was preceded in death by his wife, Isabel Rodriguez in 2006, his son, Chris G. Rodriguez, Jr. in 2016; his father, Juan Rodriguez and mother, Margarita Hernandez Rodriguez; his sister, Cecaria Rodriguez Christobal was a US military veteran having served in the US Marine Corps during World War II until his Honorable Discharge in September of 1946. He was a life long member of St. Margaret Mary Catholic Church. He and Isabel were always very involved in the movement of "Los Crusillistas" organization. Christobal was a retired-automotive mechanic. Christobal is survived by his loving family, his son Jesse G. Rodriguez and wife, Esmeralda Rodriguez of Bastrop, TX.; his daughter-in-law, Esperanza Rodriguez of Lamesa; his grandchildren, Jeffrey Rodriguez of Austin, TX., Jimmy Rodriguez of Lamesa, Benji Rodriguez and wife, Chrystal Rodriguez of Lamesa, Bryan Rodriguez of Lamesa, Debra Rodriguez of Bastrop, TX., 8 great-grandchildren and one great great grandson; his brothers, Joe Rodriguez of Muleshoe, TX., Raul Rodriguez of Hobbs, NM.; his siters, Maria Garza of Hobbs, NM. and Beatrice Cubarudio of Hobbs, NM.

The family of CHRISTOBAL (Chris) RODRIGUEZ SR. created this Life Tributes page to make it easy to share your memories.

A Catholic funeral mass will be celebrated for Christobal H....

Send flowers to the RODRIGUEZ family.