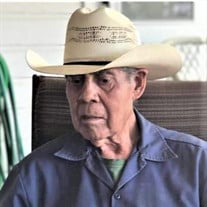 Catholic funeral mass services will be celebrated for Cesario Fernandez age 85 of Lamesa, TX., at 10:00 a.m. on Saturday, August 7, 2021 at Our Lady of Guadalupe Catholic Church with Father Chacko Thadathil officiating. Funeral arrangements were under the care and direction of Gonzales Funeral Home. Viewing and visitation will be held on Friday, August 6, 2021, from 9:00 a.m. until 9:00 p.m. at Gonzales Funeral Home with a Rosary prayer service starting at 7:00 p.m. at Gonzales Funeral Home Chapel. Cesario passed away on Thursday, August 5, 2021 at his home in Lamesa, TX. He was born on August 27, 1935 in El Fuerte Rio Grande Zacatecas, Mexico. Cesario married Maria Vidales on December 26, 1960 in Lamesa, TX. He was preceded in death his wife, Maria Vidales Fernandez; his son, Jesse Fernandez; his parents, Julian and Luisa Fernandez; his brother, Casiano Fernandez; his sisters, Dolores Bautista, Remedios Montelongo, and Ignacia Garcia. Cesario was a retired farmer. His hobbies were cross word puzzles, his special interest was that as a baseball fan. Cesario was a member of Our Lady of Guadalupe Catholic Church where he served as an Usher. He enjoyed spending precious time with all of his granddaughters. He treasured his great-grandchildren. Cesario is survived by his loving family, his daughters, Luisa Barrientos and his son-in-law, Tony Barrientos, and Lupe Fernandez, all of Lamesa, TX.; his son, Joe Fernandez and his daughter-in-law, Gloriane Fernandez of Wylie, TX.; his daughter-in-law, Sylvia Fernandez of Lamesa, TX.; his sister, Lorenza Fernandez Reveles and his brother-in-law, Cresencio Reveles of El Fuerte Rio Grande Zacatecas, Mexico; 5 grandchildren, and 8 great-grandchildren; numerous relatives and friends. Pallbearers, Tony Barrientos, Steven Delgado, Liborio Martinez, Richard Alaniz, Santiago Mendez, Jay Guerra, Anthony Cantu.

The family of CESARIO FERNANDEZ created this Life Tributes page to make it easy to share your memories.

Catholic funeral mass services will be celebrated for Cesario...