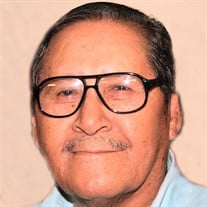 A Catholic funeral mass will be celebrated for Celestino Vela Alonzo, (Tino) age 86 of Lamesa, TX. at 2:00 p.m. Thursday April 4, 2019 at St. Margaret Mary Catholic Church with Father Joseph Kurumbel officiating. Burial will follow to the Dawson County Cemetery. Funeral arrangements were under the care and direction of Gonzales Funeral Home of Lamesa, TX. Viewing will be at Gonzales Funeral Home on Tuesday and Wednesday with a Rosary prayer service at 7:00 p.m. The family visitation hour will be on Tuesday from 5:00 p.m. until 6:30 p.m. Celestino passed away on Sunday March 31, 2019 in Lamesa, TX. He was born on April 6, 1932 in Donna, TX. Celestino married Amelia Gonzales on October 23, 1961 in Hereford, TX. He was preceded in death by his wife, Amelia Alonzo; his parents, Basilio and Isidra Alonzo; his brothers, Manuel Alonzo, Thomas Alonzo, and Pedro Alonzo; his sister, Paubla Alonzo Hernandez. Celestino farmed for many years, but the one farmer he worked for the most was Frank B. Jones. Tino retired about 25 years ago only to enjoy his retirement by doing what he loved, and that was planting rose bushes, flowers, and working with his daguthers' Alice yard where Tino always looked forward to having a garden to work with and his son-in-law Johnny loved to get the ground ready for Tino to start planting the garden. He loved attending his grandsons, JR, JP and Joel's sporting events. Celestino enjoyed playing the "PowerBall" and buying Texas lottery tickets. One of his pride and joys were being around his grandchildren and great-grandchildren. He loved playing with pets, and enjoyed watching his Western classic movies. Celestino was a member of St. Margaret Mary Catholic church for many years. Survivors include his daughters, Alice Ortegon and husband Johnny Ortegon of Lamesa, TX., and Lydia Rader and husband, Kelly Rader of Eastvale, CA.; his brother, Aniceto Alonzo of Weslaco, TX.; his sister, Lupe Alonzo Lucio of Elsa, TX.; 5 grandchildren and 11 great-grandchildren; several relatives and friends. Pallbearers, JR Ortegon, JP Ortegon, Joel Ortegon, Gilbert Gonzales, Carlos Garza, Israel Gonzales. Honorary pallberers, Jonathan Ortegon, and Dylan Ortegon.

The family of CELESTINO VELA ALONZO created this Life Tributes page to make it easy to share your memories.

A Catholic funeral mass will be celebrated for Celestino Vela...

Send flowers to the ALONZO family.