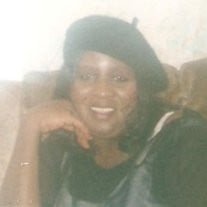 Funeral services for 51 year old Brenda Carol Jackson, also known as "Blacc Beauty", of Lamesa, Texas will be at 2:00 p.m. on Saturday, August 31, 2013 at First Assembly of God Church in Lamesa with Pastor Joe Willie Cook officiating. Burial will follow at Dawson County Cemetery under the direction of Gonzales Funeral Home. Visitation will be held on Thursday and Friday at Gonzales Funeral Home. Brenda passed away on Friday, August 23, 2013 at Covenant Medial Center in Lubbock, Texas. Brenda was born on February 27, 1962 in Lamesa. She graduated from Lamesa High School. She really enjoyed playing cards and dominoes with her special friends, Robert Maxwell, Leroy Calloway, Melvn Hall, Terri Williams, Paula Fleming, Marva Louis and Edith Jackson and many more folks. She was a hard worker and a giving person always willing to help anyone if she could and kept a smile on her face. "Blacc Beauty" will be greatly missed! She is preceded in death by her mother, Irene Jackson; her brother, Rodney Jackson; her grandmother, Oria Jackson; her grandfather, Norman Jackson. Brenda is survived by her daugther, Brittney Jackson of Lubbock, Texas; her sisters, Angela Jackson of Lamesa, Texas and Linda of Dallas, Texas; her brothers, Shane Jackson, Lloyd Jenkins, Floyd Jenkins, Lewis Jenkins, all of Lamesa, Texas and Danny of Dallas, Texas; and other family and friends.

The family of Brenda Carol Jackson created this Life Tributes page to make it easy to share your memories.

Send flowers to the Jackson family.